The USC School of Cinematic Arts has had an ongoing relationship w/ TBS producer Norico Wada, specifically in the Division of Animation and Digital Arts, where xRez Studio partner Eric Hanson instructs 3d computer graphics and visual effects classes. She introduced USC to the work of Mr. Masaaki Tanabe, a Japanese filmmaker who lived as a child adjacent to the famed “Peace Dome” building at the time of the blast. Returning from the mountains to the loss of his entire family and city, Mr. Tanabe ultimately strove to become a filmmaker and put a human face on what was lost through initiating a 10-year long CGI reconstruction of pre-war Hiroshima. With USC asked to assist in his effort, Hanson was able to teach a Digital Lighting and Rendering class that students could choose to render the Peace Dome model for their final project. Waseda University in Tokyo provided students from their architectural program to interface with USC’s, and several Skype conference meetings were made between all of the students. The students were tasked to provide well-rendered still images by the end of the term, but the collaboration will continue to further develop the work, into strong cinematic, animated, and narrative film sequences.

The Japan-U.S. Hiroshima Reconstruction Project is significant as it is symbolic and meaningful at many levels. First and foremost, it shows a dedication and interest from today’s youth to reinforce common good will and humanity beyond a prior generation of adversarial relations. Secondarily, the acts of barbarism that take place in all wars need to be evaluated and not forgotten, so this project furthers the agenda of facing history, learning from it, and striving for the goal of growing peace between nations.

From an academic level, the work allowed the students to develop their skills in computer graphics, specifically in lighting and rendering, while engaging in a meaningful project versus than a dry academic exercise. They were challenged to base their final work conceptually for the creation of their renders. They produced a rich array of solutions, from illustrating the building at night in present day Hiroshima, to showing it as a museum installation, to an impressionistic watercolor period rendition, and to recreations of period photography based on imagined “sense-memory”.

Ultimately, the work is slated to be presented at the United Nations in May of this 2010 during a speech of Mr. Tanabe’s, as well as on an evolving basis. We are proud to contribute to this historic and important collaboration. 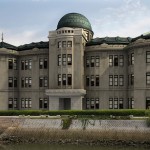 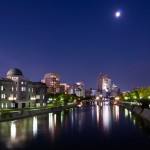 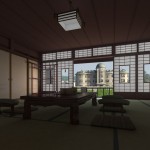 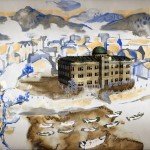 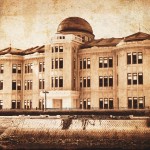 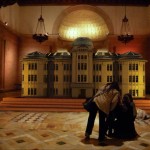