xRez partner Eric Hanson recently provided several key CGI sequences for Griffith Planetarium‘s new fulldome visitor film, “Time’s Up“. The film explores the nature of time in the universe, from human to cosmic scales. To provide a sense of humanity’s understanding of time and to dispel certain end of the world prophecies, the first sequence created shows a night time descent into the Mayan city of Tikal at it’s cultural peak, landing adjacent to a carving on Stela 3, a stone monument that shows a typical Maya long count calendar. From there, the viewer is shown the advance of time into the present, causing the city to fall into ruin into it’s present day state. A time reversal of a lightning strike onto a Ceiba tree shows the logic of forward-facing nature of time, and ends with dawn rising over the ruins. The animation shown here is devoid of the live narration element that Griffith typically employs, so appears at a slower pace.

Other sequences produced for the show envision a fanciful imagination of Los Angeles in the year 2512 as an ecotopian reversal of urban sprawl, suggesting cosmic time will do as it will, but humanity is free to determine our immediate fate.

Griffith curator Laura Danly directed the film, and it has received praise from the Los Angeles Times. Griffith art director Don Dixon provided key guidance in the look of the work and xRez contractors Matt Wachter and Kai Solberg provided ace 3d modeling for the job. 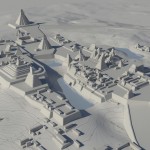 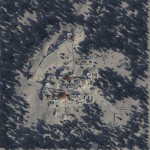 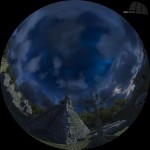 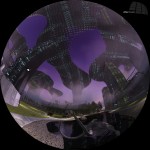 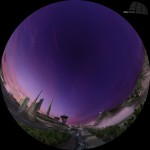