xRez Studio’s award-winning “Crossing Worlds” was one of the selected screenings for “Dome Day Asia 2010” on March 9, 2010. Dome Day Asia was a special event to explore the new possibilities of the world’s highest resolution fulldome digital projection theaters.

For those of you who may not be familiar with fulldome theater you make want to take a look at this article for more explanation.

By re-rendering the film from higher resolution versions of the original 32k+ photographic images we were able to easily match the extreme resolution of the 8k fulldome projection. The principal photography for “Crossing Worlds” was shot as high-resolution panoramas that were “camera mapped” onto 3D geometry.  Because we used this hybrid of photographs and CG with 3D geometry we were also able to get the parallax needed for a stereoscopic (S3D) render in order to compare these new systems to the older lower resolution monocular systems.

At the time of this writing (March 2010, for more up to date info take a look at Lock Ness’s fulldome compendium) there are only three 8k fulldome systems in the world, with all in China: Hong Kong, Macao, and Beijing. Dome Day was presented by SkySkan and took place over two days, one day in the Stanley Ho Space Theatre in the Hong Kong Space Museum and one day in Macao China’s New Science Center and Planetarium. Both theaters project 35 mega-pixel video, a 8192 x 8192 pixel (8k) image, Macao’s system is S3D.

Both fulldome systems viewed on Dome Day were installed by SkySkan

The first 8k theater in Europe will be coming on-line in May to the LWL Museum for Natural History in Muenster Germany (6 JVC SH4K Projectors on a 20 meter dome).

Additionally there are several S3D domes installed at lower resolutions in Hilo Hawaii and the Tokyo Science Museum. Hong Kong is expecting to upgrade the front half of the dome to S3D with 3 more projectors while leaving the back half of the dome in mono 8k. The Chinese Maritime Museum in Shanghi, the Swedish Norrköpings Visualization Center are also installing S3D domes and the Allosphere at UC Santa Barbara, which is under development but in operation, has several front facing projectors working in S3D. Finally there have been a number of temporary and/or portable installations of stereo dome theaters by a number of companies all over the world.

Greg Downing of xRez Studio attended the event, screening “Crossing Worlds” in both theaters in 4k and 8k. Even the 4k version scaled up to 8k was incredible and the native 8k version further increased the level of realism. Subtleties such as the lighting on the small crevices in the canyons created a high impact. Considering how much brighter the projection was compared to any previously viewed projections there was surprising little amount of bounce from the bright areas across the screen that would normally fill in the black levels. Overall it was an incredible way to view the work.

After viewing “Crossing Worlds”, we saw a “shootout” between 70mm film projected in the IMAX DOME™ format (70mm 15 perf.) compared to digital 8k projection. The attendees then viewed some stereo pre-rendered and real-time content. After a viewing fulldome content in both the Hong Kong and Macao theaters the group then moved on to the “Bubble Theater” at City of Dreams to see the Visual Effects Society’s special venue winner “Dragon’s Treasure at the City of Dreams”, and lastly viewing some new laser projection systems presented by Joachim Ostermann of Laser Display Technology GmbH. The laser projection system was very bright at a resolution of 1600×1200 pixels, and the incredible saturation that can be achieved with this a laser based system was apparent. Laser based projection also has impressive infinite depth of field. We can look forward to future demonstrations of incredibly large color space, laser speckle elimination technology, and a 1.5 million to 1 contrast ratio. 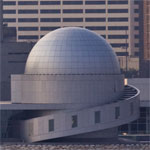 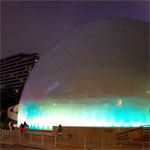