This is an interactive 33k by 16.5k pixel (550 megapixel), with 28 stops of exposure. The photo is of the interior of the Bradbury Building in Downtown Los Angeles. One of this building’s claims to fame is that the interior was used in the classic science fiction film “Blade Runner“.

This is the same HDRI panorama we showed in the CG Channel Interview. It is being displayed in HD View, this is the only viewer that will let you interactively explore a high resolution HDRI over the web. If HD View does not support your OS scrub to minute 4:42 in the cg channel video to see the effect.

The building has a very interesting history the elevators you can see in the photo were originally powered by steam engines. The water for the engines came from a spring under the building (this is where Spring street got it’s name).

The building was completed in 1892. George Wyman, the building’s architect was influenced by a science fiction novel describing the architecture of a building of the future as a “vast hall full of light, received not alone from the windows on all sides, but from the dome, the point of which was a hundred feet above … The walls and ceiling were frescoed in mellow tints, calculated to soften without absorbing the light which flooded the interior.” He was pretty successful in achieving this with his design. This interior has a very high dynamic range, a unique lighting environment and at the same time is relaxing to look at.

Be sure to fullscreen the image with

this also has options for a single exposure

or a tonemapping what is in view

. Use your scroll wheel to zoom. 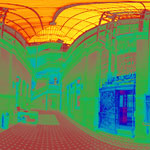