Blueplanet VR’s Eric Hanson and HyperAcuity’s Greg Downing returned to gigapixel shooting once again in May 2019, capturing a massive spherical panorama of Las Vegas for the Stratosphere casino. With the assistance of our longtime Portland-based colleague Gavin Farrell of PanoGS, three teams shot from exposed service platforms at the top of each 700′ tower leg with Clauss and Roundshot robotic heads, Sony A7Riii’s, and Canon 300mm L primes, with the final 88-Gigapixel 3000-shot spherical image completed at 300,000 pixels wide. To provide a lower cap for the image, the team shot straight down from the upper limit of the “Big Shot” ride gantry at another 100′ up. The final image is displayed on six 4k touchscreen panels arrayed around the observation level, allowing deep zooms on a variety of local historic and scenic attractions.

Thanks to Kevin Potts at Coherent Design. 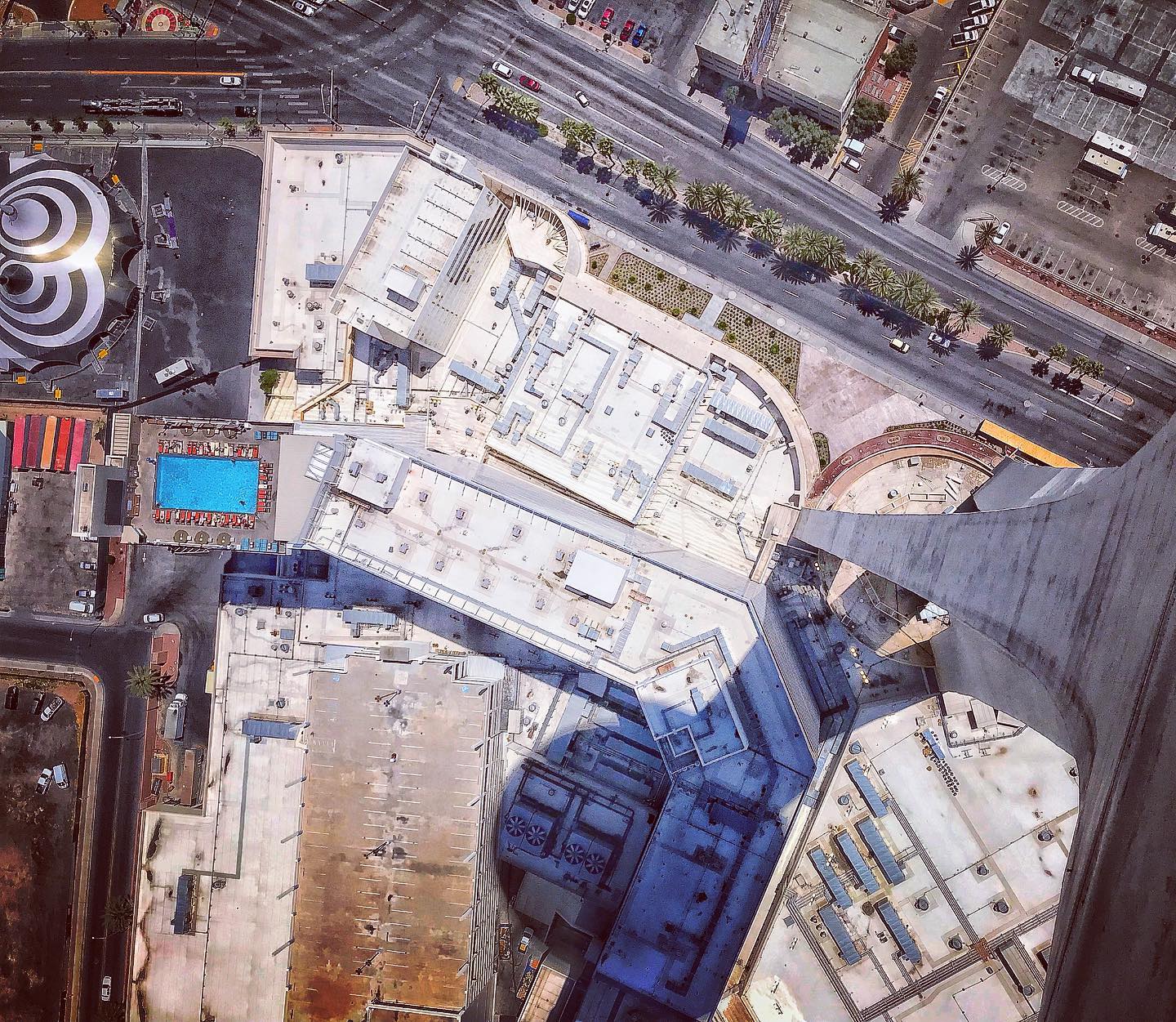 Blueplanet VR and HyperAcuity have the great pleasure of working with the Dunhuang Foundation and Dunhuang Academy in capturing the remarkable Mogao Caves in China for creating rich volumetric VR experiences. The Mogao Caves are one of the world’s great cultural heritage and Asian art sites, dating back over 1000 years old.  The site receives millions of visitors a year, and consists of several hundred excavated grottos in the Gobi desert, each containing remarkable displays of Buddhist artwork developed during the height and prosperity of the Silk Road. The Dunhuang Foundation is a US-based organization with the mission of preserving Mogao’s past and providing for its future with various initiatives, this being one. The Dunhuang Research Academy is a Chinese government-based organization tasked with managing, documenting, and preserving the site. Our collaboration with these two entities have allowed us to capture several of the caves in unprecedented 3D volumetric detail and accuracy with advanced photogrammetric techniques. The result is an interactive volumetric VR experience that provides context and understanding to the site, allowing virtual visitation and interpretation to these remarkable, fragile, and priceless environments. A public release of the experience on VR distribution portals is planned for late 2019, with plans to grow the collection of caves over time.

All images are 3d photogrammetric models as seen in VR, click to enlarge. 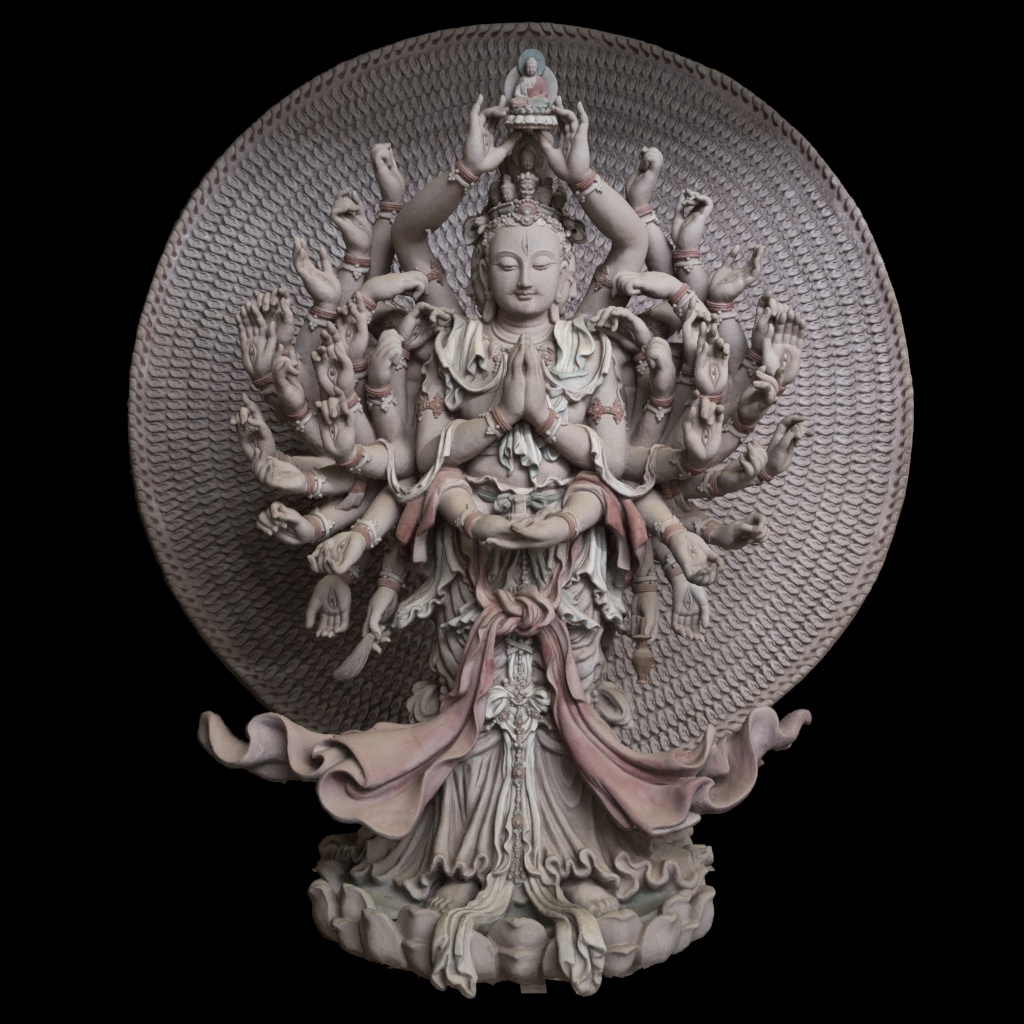 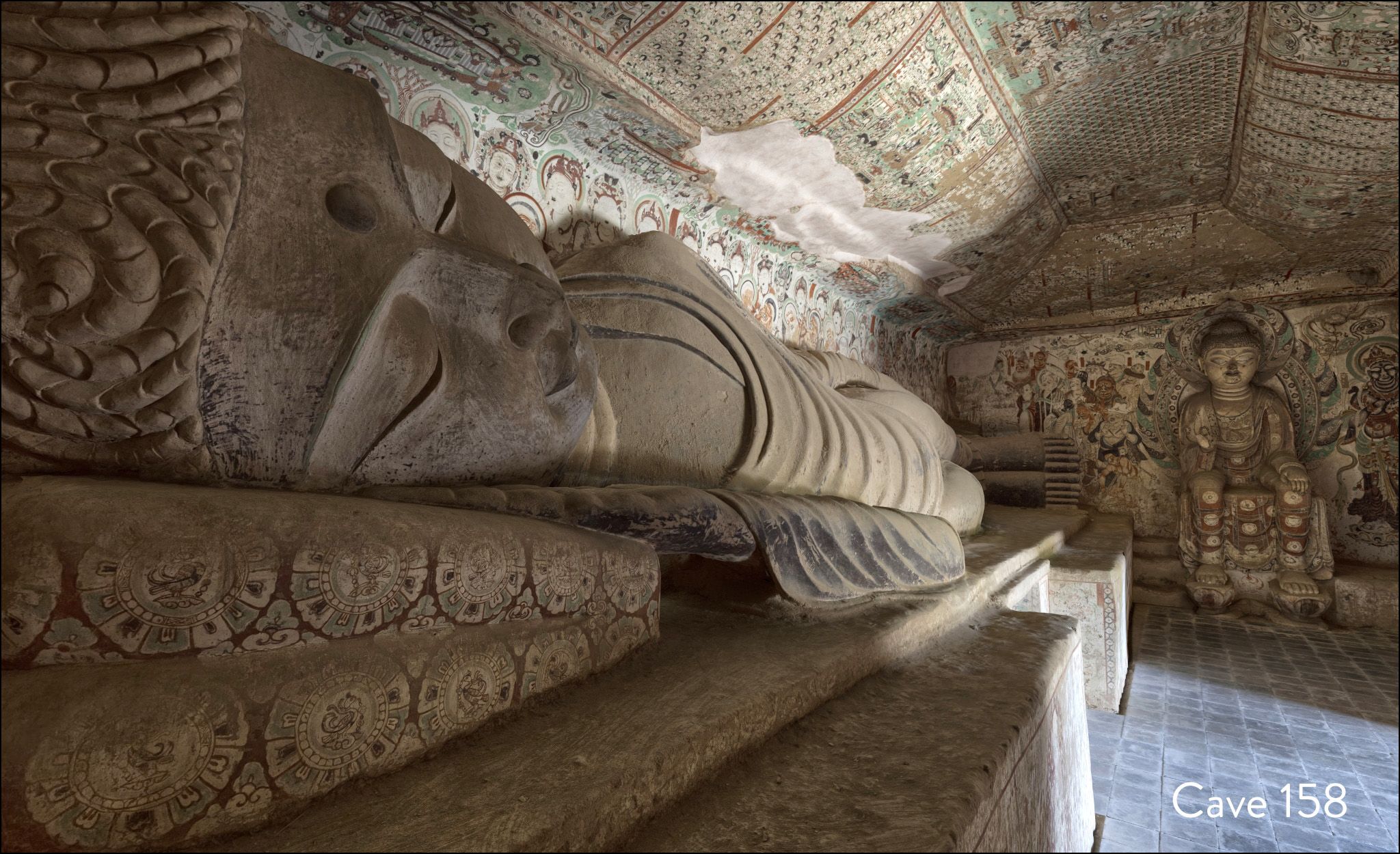 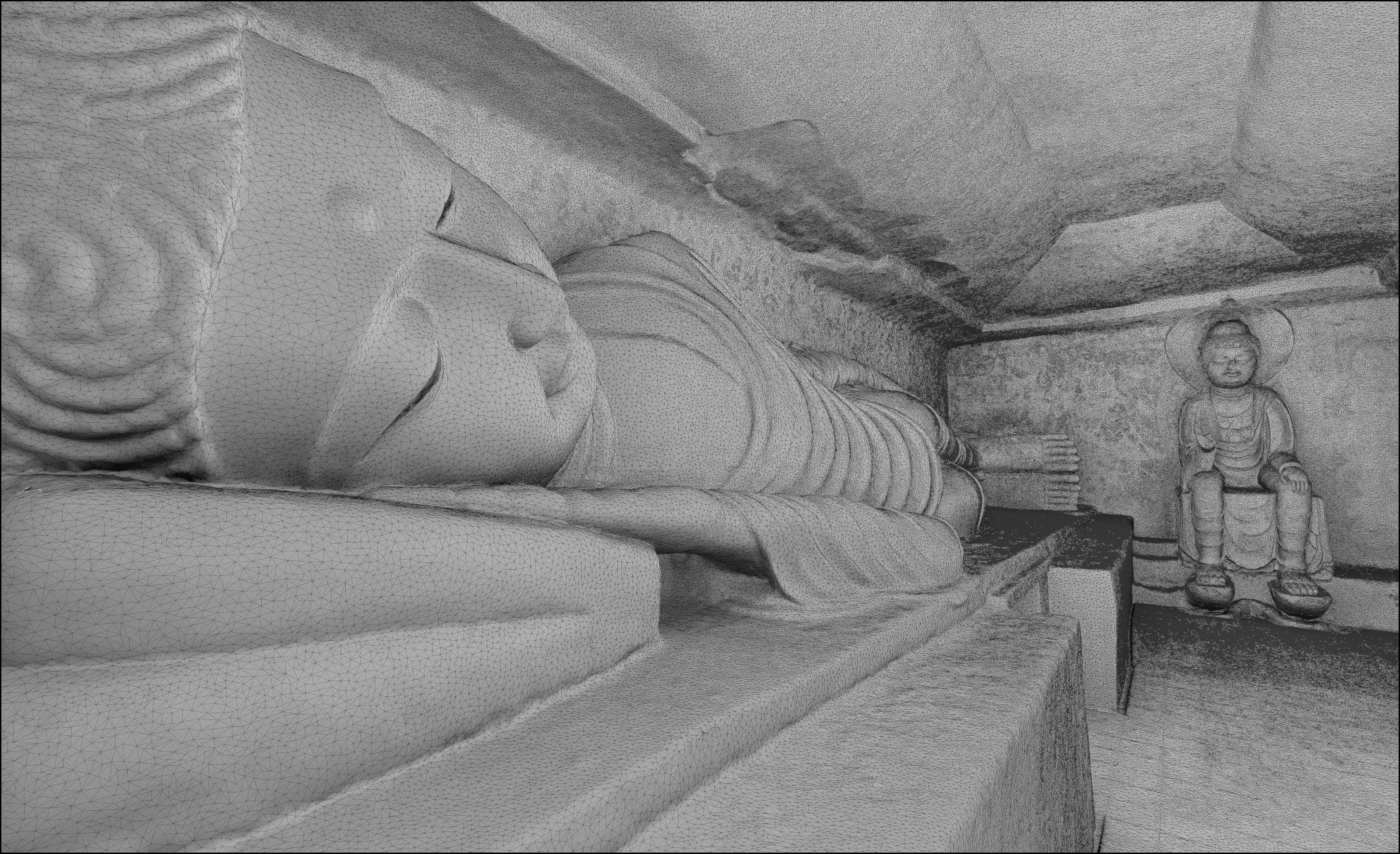 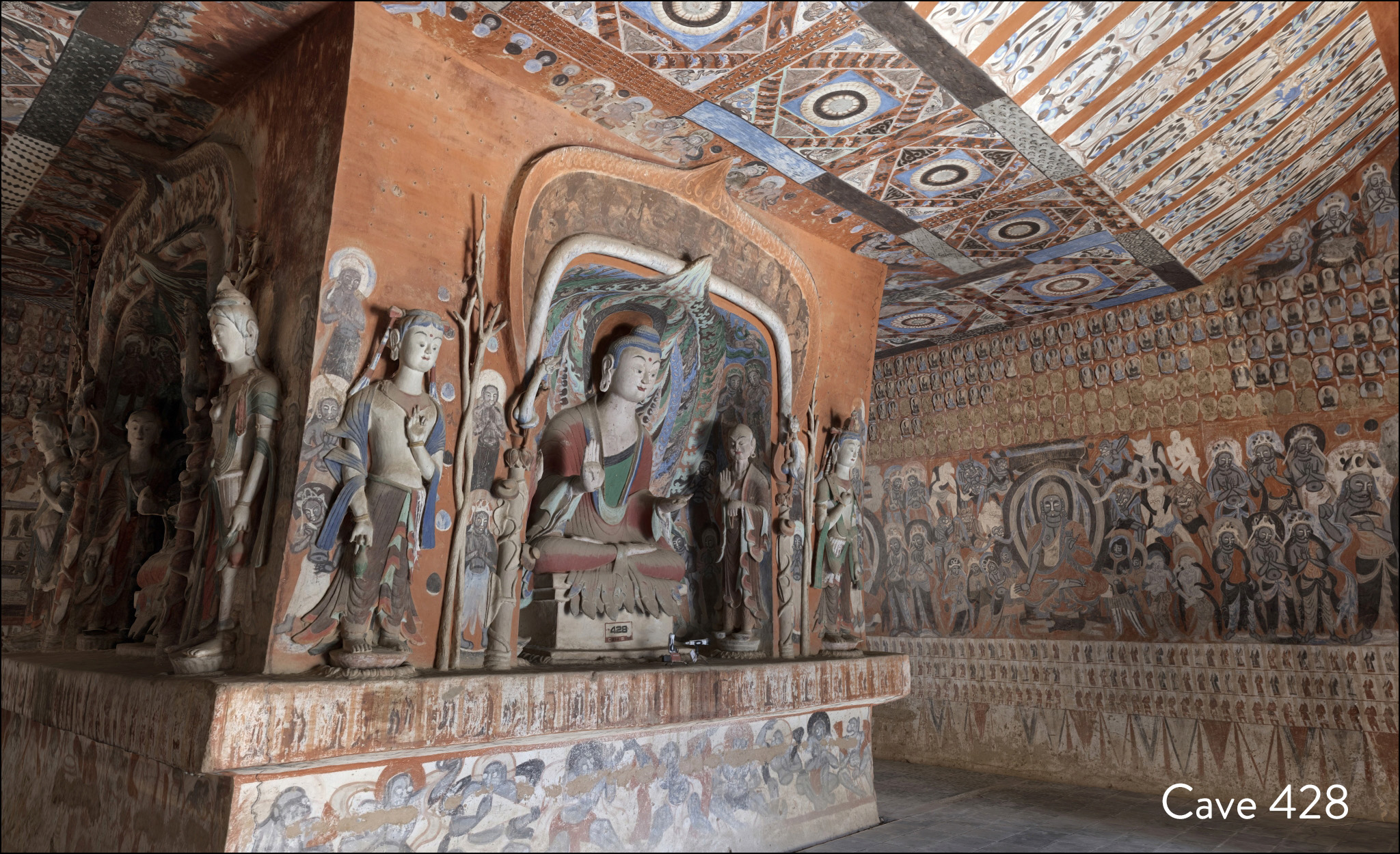 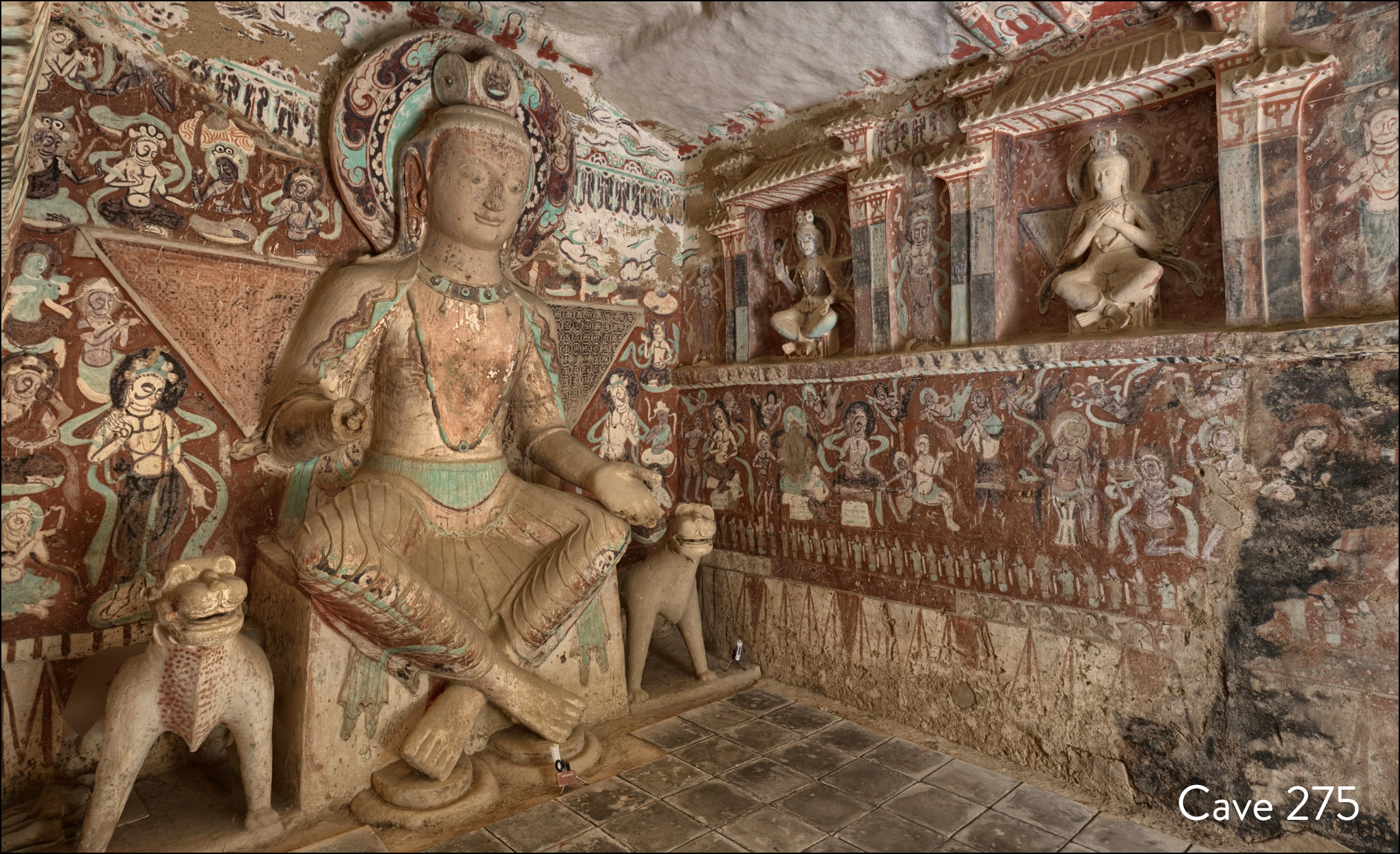 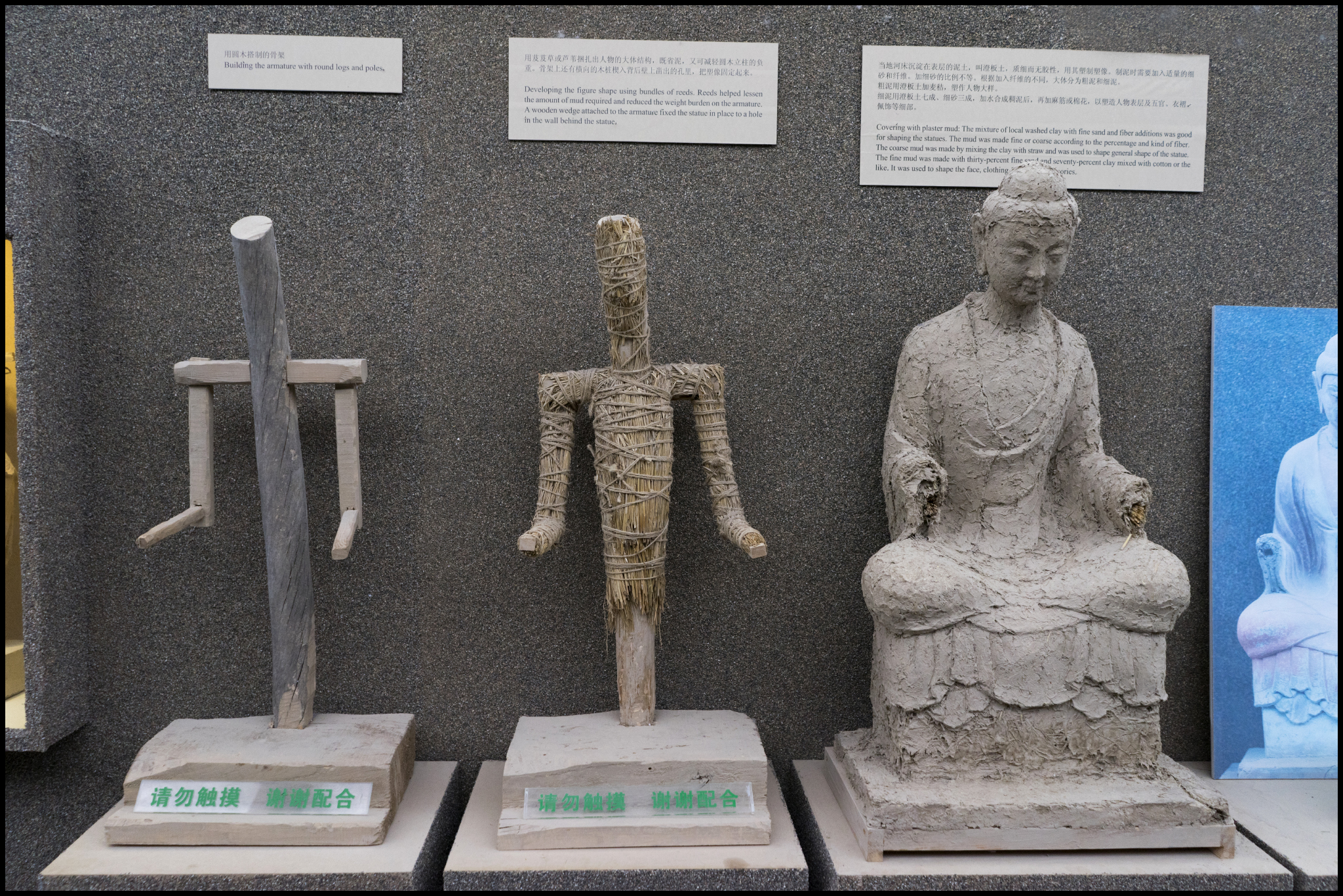 Yosemite Valley has always held fascination for Eric Hanson of Blueplanet VR and Greg Downing of Hyperacuity. Initially, they used Yosemite as a test-bed subject for developing our early gigapixel imaging and terrain integration VFX techniques of large landscapes. That early work led to the 2008 Yosemite Extreme Imaging Project, where they orchestrated 70 photographers to document the sixteen miles of valley walls for NPS Geologist Greg Stock, shooting 10,000 images in 45 minutes.  The unprecedented resolution and freely accessible online publishing of that work provided useful reference for the climbing community, academic research, and Yosemite search and rescue (YOSAR).

In 2015, after integration of the gigapixel imaging with a large-scale laser scanning effort from Battista Matasci of the University of Lausanne, xRez Studio had the opportunity to contribute to the NY Times on a webGL interactive visualization of Tommy Caldwell and Kevin Jorgeson’s free climbing ascent of the “Dawn Wall”. The Dawn Wall on Yosemite National Park’s El Capitan is considered the most difficult rock climb in the world. The NY Times interactive feature on it can be explored in full screen. In addition to the interactive piece the New York Times has had very good coverage of the historic event, you can read more on it here and here.

Yosemitebigwall.com‘s Erik Sloan, a longtime valley xRez collaborator, author, and holder of over one hundred El Cap climbs, has long utilized our images to lay routes over in his climbing guidebooks. In 2016, we hatched a plan to shoot El Cap in record-setting 228,000 pixel resolutionusing an 800mm Canon L prime with a robotic Rodeon head. Early one morning, we followed Erik and Roger Putnam , shooting 2,000 images of constant moves up the Nose route, with Erik and Roger finishing in 7 hours. The following day, we then shot the entire width of El Cap with 2,000 images to comprise the base image. A massive post-production stitching job then began with uber-intern Max Good, taking over 2 years of off-hours to finalize. Boulder, Colo Sender Films then utilized sections of the image to help describe the Dawn Wall routes in their film, “The Dawn Wall”. Meanwhile, Erik worked diligently tracing routes over the extremely high resolution image.  Finally, the full image was completed, as shown interactively below, at only one third of the full resolution. 60″ wide display prints were then produced and are currently sold on Yosemitebigwall.com. 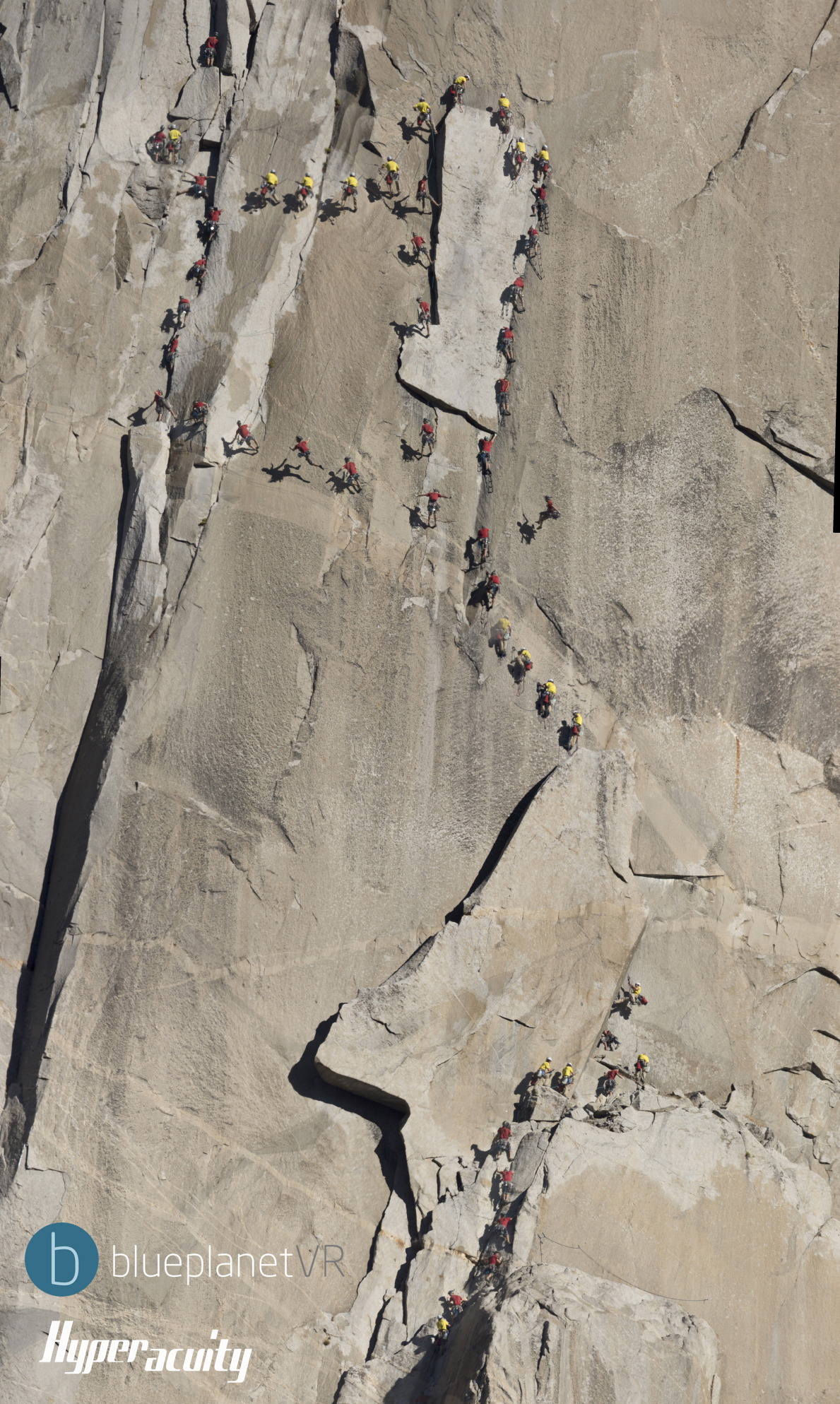 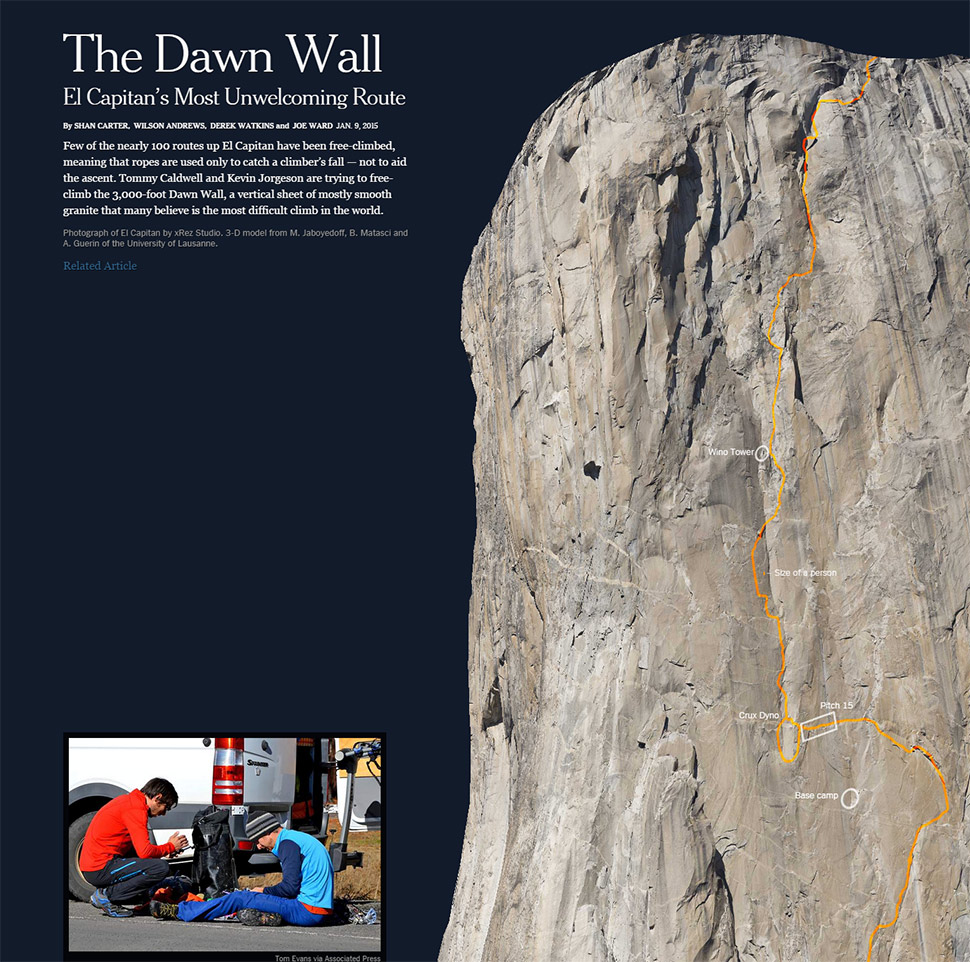 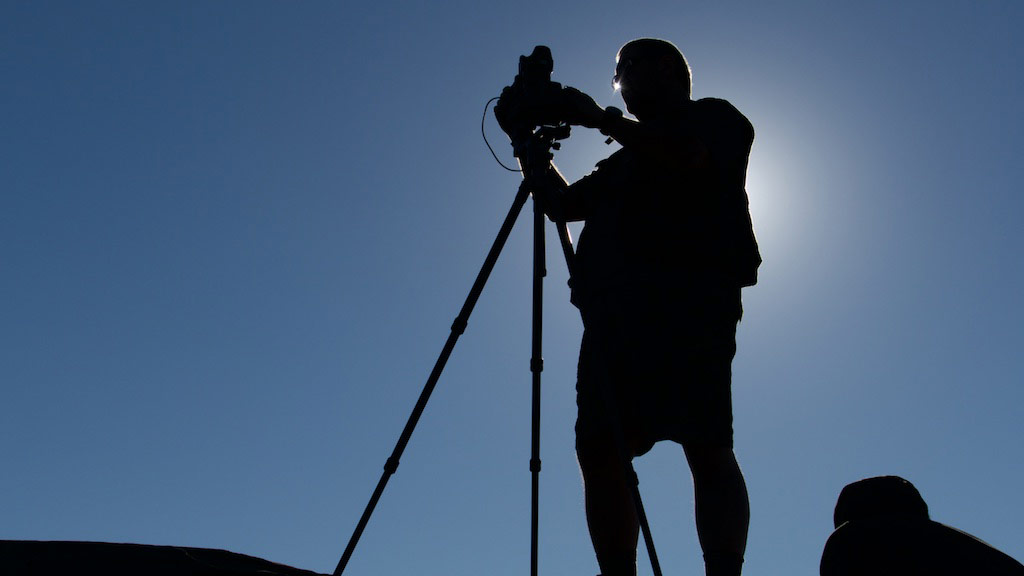 In June of 2015, xRez set out to shoot alignments of the summer solstice occurring with known Anasazi ruins in conjunction with researchers from the University of Colorado in Boulder. END_OF_DOCUMENT_TOKEN_TO_BE_REPLACED

xRez recently had opportunity to contribute to the NY Times on a webGL interactive visualization of Tommy Caldwell and Kevin Jorgeson’s free climbing ascent of the “Dawn Wall”. END_OF_DOCUMENT_TOKEN_TO_BE_REPLACED

We were fortunate to spend time shooting with our old friend Olafur Haraldsson in his home turf in Iceland during the summer of 2014. END_OF_DOCUMENT_TOKEN_TO_BE_REPLACED

TIME 2014/ Pull of the Moon is an experimental immersive film based on the 2014 collaboration of renowned Chinese artist Ai Weiwei and Navajo artist Bert Benally’s ephemeral land art performance in rural New Mexico in June 2014. END_OF_DOCUMENT_TOKEN_TO_BE_REPLACED