Digitally projected full dome theaters are a new and growing form of immersive cinematic presentation for small audiences. There are thousands of these theaters worldwide (see an incomplete list here), and many are domed planetariums that have been retrofitted w/ high resolution digital projectors that “stitch” multiple projections together into one large surround image, allowing very high resolutions at 4 or 8k. Because the moving image completely surrounds the audience it conveys an unusually strong sense of “being there”.

The panoramic media that xRez Studio captures and produces is ideally suited for this type of display. It is often easier to compose a dome image in post using virtual cameras in 3d animation software than composing the image in live production using a traditional motion picture camera with a fisheye lens. Animation software can simulate how the image will project in theaters making it easier to adjust for different dome tilts.

Using high resolution panoramic imagery integrated into 3D software allows us to take advantage of it’s powerful flexibility while presenting real-world imagery. We are currently developing a method utilizing a stitched panoramic HD capture, where we can far exceed even the highest resolution of emerging digital cinema solutions. Our first dome film format film, “Crossing Worlds” won a coveted “Domie” for Best Design in a Dome at DomeFest 09 in Albuquerque, NM and was later shown in the world’s highest resolution dome theater at Dome Day Asia. A visual tone poem designed for the emerging fulldome planetarium format, “Crossing Worlds” utilizes spherical photography from the American desert west to immerse the viewer in a transcendent spectrum of austere landscapes. 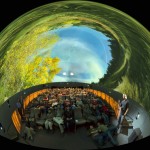 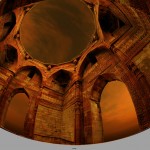 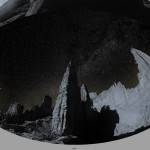 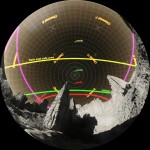 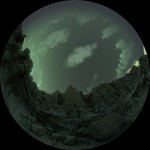 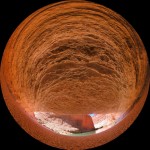